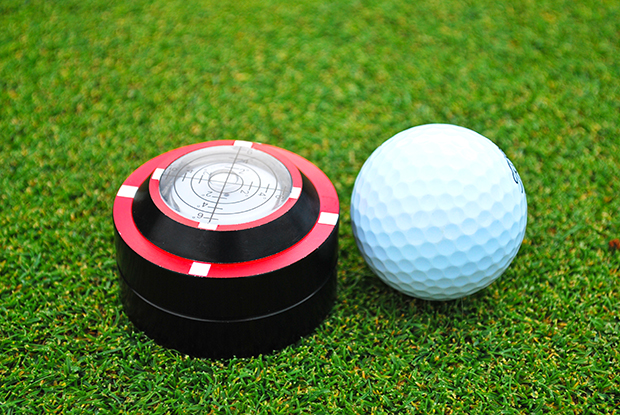 Now golfers can determine the slope and true fall line of a green while practicing putts.

“We received a lot of positive feedback from those who ordered and tried the original Dead Zero Putting Disk. Some of the comments from the more elite players included a desire to know the slope of the green while practicing. We listened and have added a bubble-level to the top of the disk,” states Eric Schmitt, Creator and President of the Dead Zero Putting Disk.

The Dead Zero Putting Disk is a putting training aid founded in scientific research that applies the proven concept of reduced-size target training. Based on published research involving ideal putt speeds, the diameter of the patent-pending Dead Zero Putting Disk is sized appropriately so that any putt that strikes the disk either directly or with just a subtle glance represents a putt that would have gone into the cup. Hit it and it’s in.

“Successful putting requires the ability to repeat a stroke and the confidence to do so in all situations. I tell my students who want to quickly reduce their scores and handicaps to focus on eliminating 3-putts and to start making more putts inside eight feet. The average golfer 3-putts three to four times per round. Eliminating those putts and making a few extra one-putts from inside eight feet can knock your score down by five or more strokes per round,” states Eric Johnson, Director of Instruction at Oakmont Country Club. “I advise anyone looking to save strokes on the green to start practicing with the Dead Zero Putting Disk.”

The Dead Zero Putting Disk allows golfers to practice putting to a reduced-diameter target in any location on any green or at home at any time. It will help golfers gain confidence to make more putts, especially those of inside eight to ten feet.

The suggested retail price for the new Dead Zero Pro model is $29.95 and includes a bulls-eye patterned ball marker and an embroidered pouch for storage. Buy it now here.